This is a little introduction to Linux for you architects who have never tried it, but would like to know what's all the fuss about it and if it is really usable for working with architecture. If you know Linux already, I'm sure you'll find a lot of missing info in this text and find it maybe a bit too enthusiastic, but we are whowe are, aren't we...

This article is a sequel of another short article I wrote back in 2009 to present some tools available to architects on the Linux platform.

Just a small note, What it is exactly?

Actually it's wrong to call Linux Linux. Linux systems are not all-in-one, monolithic things like Windows, but rather a complex assemblage of software pieces, Linux being only the base block.

Linux is based on Unix, its predecessor, and follows a basic Unix philosophy: Rather than having one huge all-in-one application that does 1001 tricks, have 1001 small applications that do each one one simple task, but do it well.

Most of the other pieces come from a project called GNU, that's why those systems are usually called GNU/Linux and not just Linux. But let's make it simple and continue to call it Linux.

Of course make those thousands of small applications all work seamlessly is not a small work, but fortunately it has been done a lot of times already. This is where comes what we call a Linux distribution, which is a complete operating system, based on GNU/Linux, made of hundreds of little pieces, all working in a big symphony. Ubuntu is one of the most famous Linux distributions.

First things first, Why Linux Is For You

Of course nothing comes without disvantages. Here are a few issues you might expect:

If you managed to read until now, you must be a bit curious to see what it looks like, right? I gathered here a couple of screenshots from the most common distributions:

Below is the latest version of Ubuntu, probably the most famous of all Linux distributions, and one of the most friendly to new users. In this version, Ubuntu introduced a new way to navigate through your files and applications, called Unity, which is the vertical bar containing icons on the left: 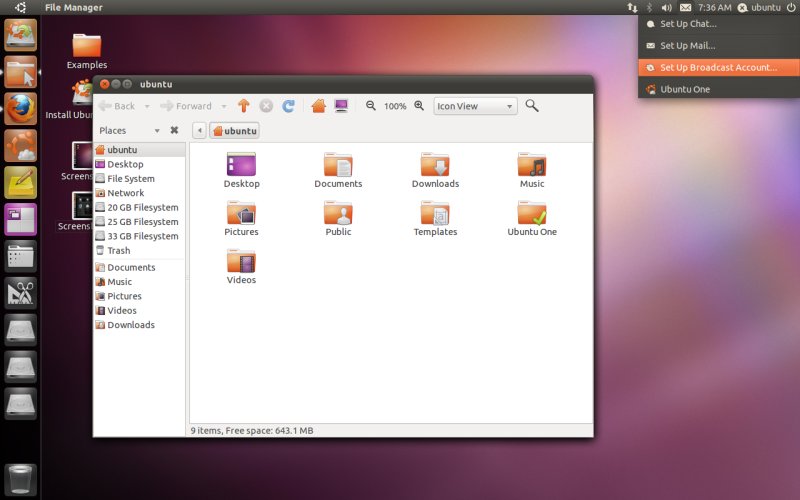 Another very good distribution is LinuxMint. Linux Mint is based on Ubuntu, so it inherits all the qualities of its father. But its developers put a special effort into style and design, so Linux Mint is often the favorite distribution used by artists: 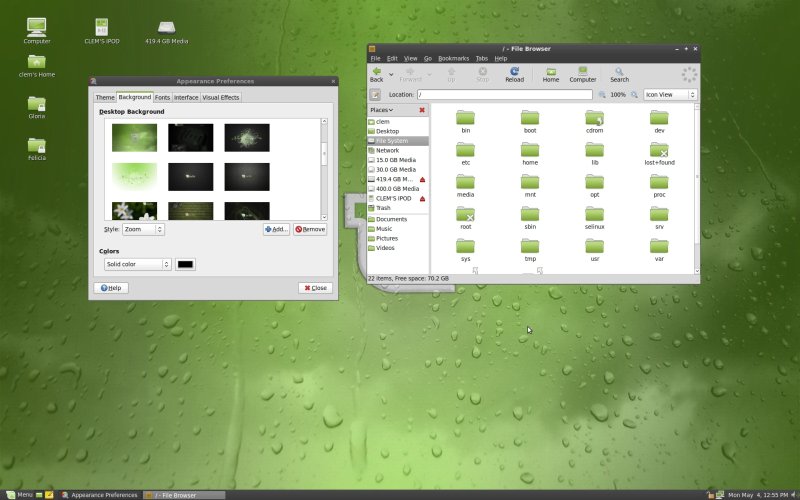 This is another of the most famous ones among new users, called Fedora. Fedora is derived from a famous commercial Linux system called Red Hat, and it inherits from it a great deal of novelty and power. Fedora is usually liked because it brings bleeding-edge features faster than the others: 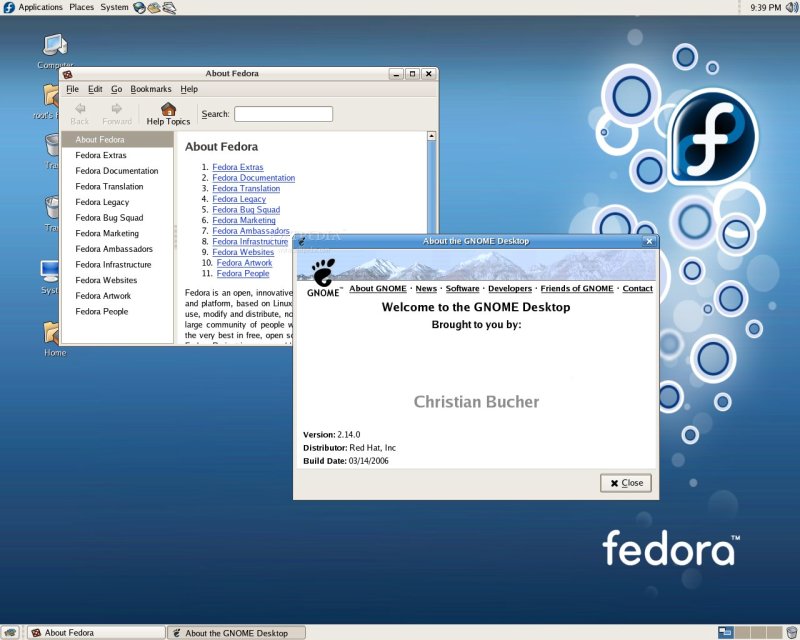 But most Linux systems are deeply customizable, and you can usually make your desktop look like your wildest dreams. Here is, for example, a screenshot of my own desktop: 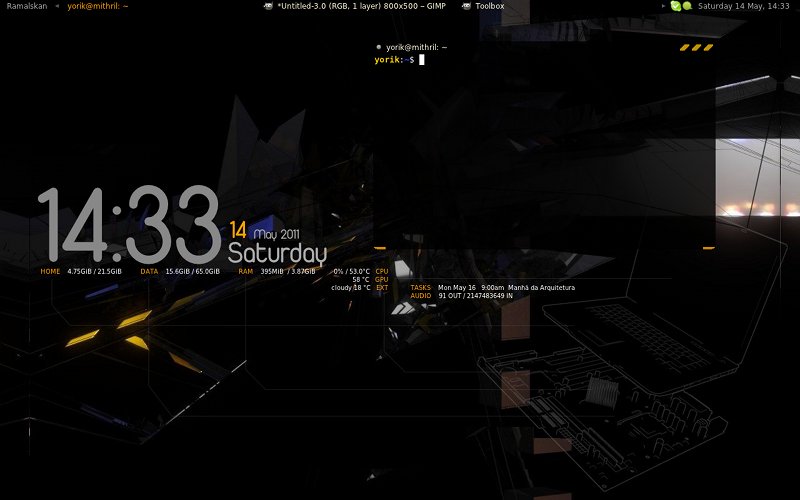 How to get it

Most Linux distributions have a great feature: The installation CD is also a Live CD, that allows you to run your Linux system entirely from the CD, without installing anything. This is a great way to test, to see if it runs well, and if you like it at all, without risking to do any harm to your current system. The proceeding is very simple:

Now where are the file explorer, the internet explorer, the windows messenger, the acrobat reader, photoshop, skype, notepad, word, excel? Well, almost none of those are there, but all have at least one equivalent. Explore the menus and you will find everything in no time. And if something is missing, it can easily be installed by the system itself.

This is, for example, the Ubuntu software center, from where you install just about anything: 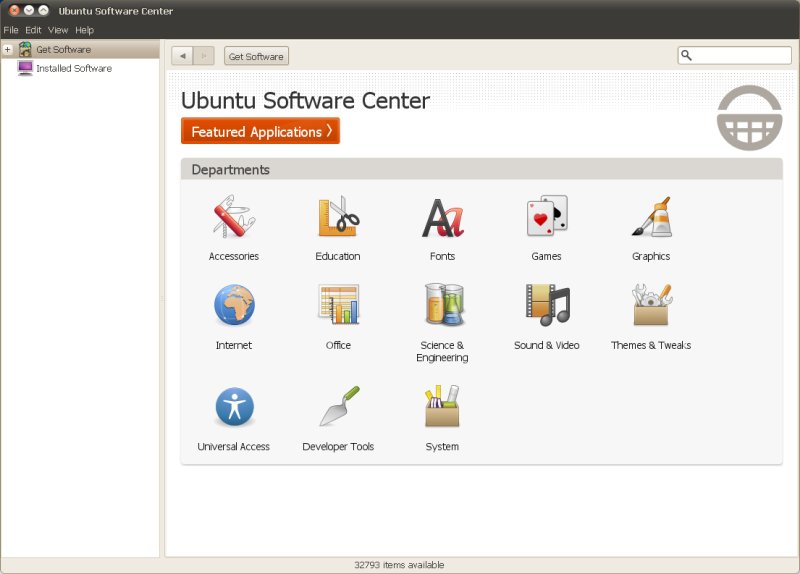 Okay, after all this bla-bla, what about doing architecture work?

The problem you'll encounter with Linux is that none of your usual architecture software will work. No Autocad, no Revit, no Archicad, no Vectorworks, no 3DS Max, no V-Ray. Those are all windows-only (some run on Mac too), and it's very unlikely that their developers will want to spend time in doing a Linux version in the near future.

So, how bad exactly is the situation?

Actually it is not bad at all, but you will need to learn to use new software, there is no way to avoid that part. Apart from that, it is actually possible to work without any problem.

In the 2D CAD field, we have a couple of options now. Some are totally free, like QCad,Cademia or the new and promising LibreCAD. Those, since they are maintained and developed by a community, might lack some commercial features like DWG format compatibility. This is LibreCAD: 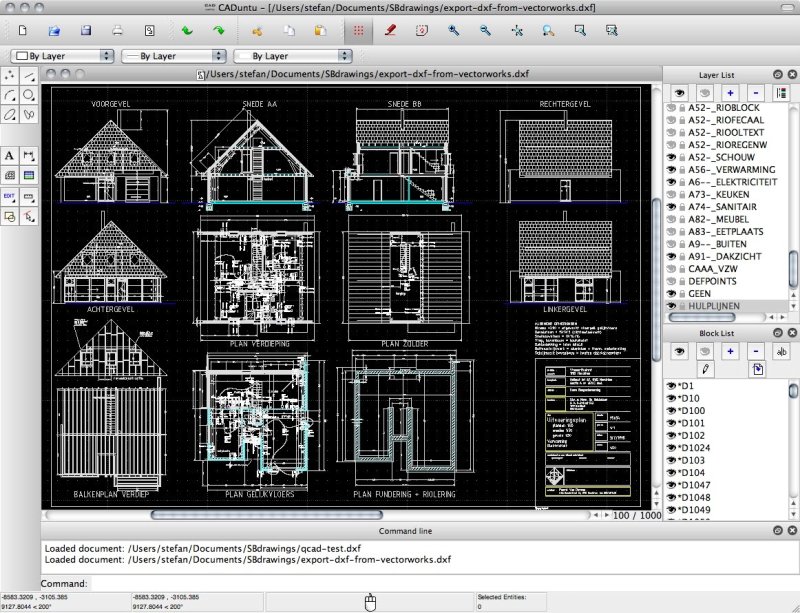 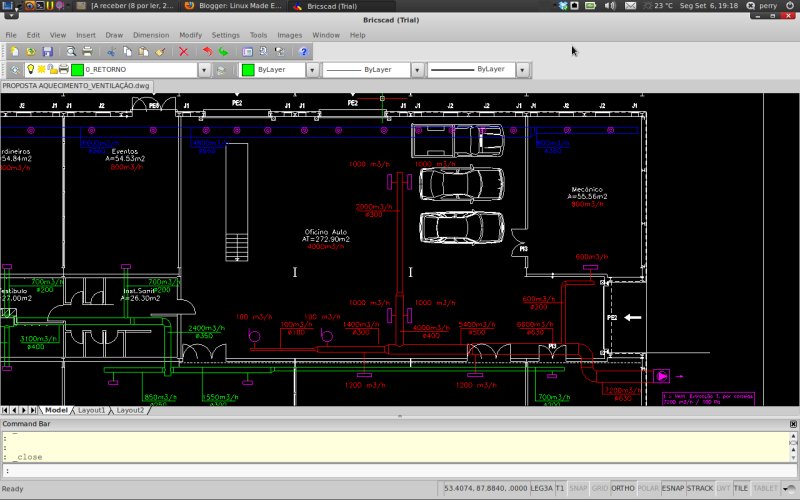 And, since a couple of months, we now have a free AND commercial application called DraftSight. DraftSight, although owned by a company, is distributed for free, and supports DWG format natively: 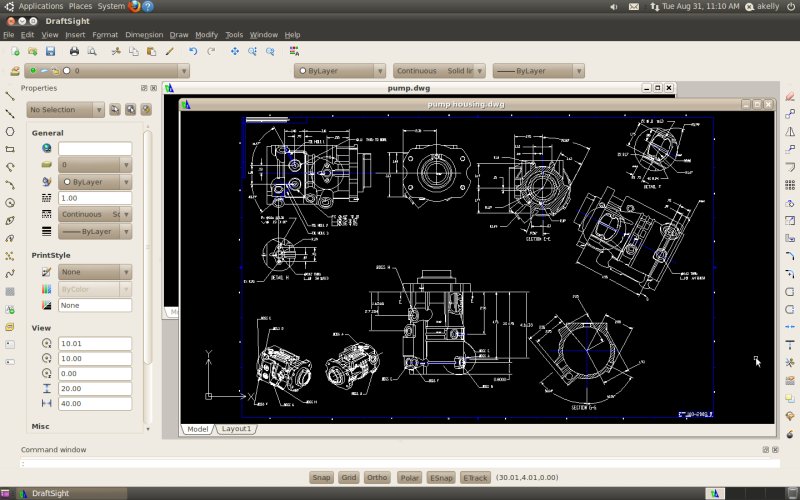 Here unfortunately things are less easy. There is at the moment no ready solution, but there are several efforts going in that direction, so the future is promising. One of these efforts is an application called FreeCAD to which I have the honor to contribute with coding in my spare time. FreeCAD is a full modern parametric modeler, and although very young, it already has a lot of interesting functionality for doing architecture, such as a 2D drawing module, usual 3D tools such as extrusion and booleans, and a 3D-to-2D module. A real BIM module is also in development. 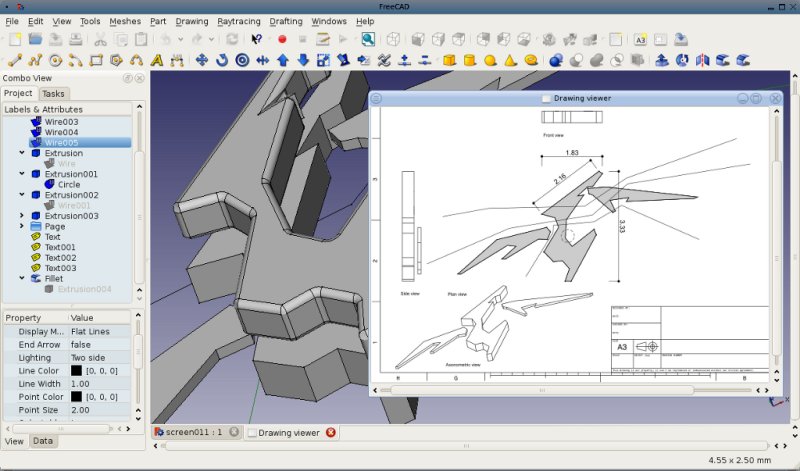 I write a lot about FreeCAD on this blog...

In the area of 3D rendering, things are not only better but state-of-the-art, thanks to an amazing piece of software called Blender. Blender runs on windows too, so chances are high that you heard about it already. Blender is for me the best general-use 3D application available today. Better than 3DS Max, better than Maya. It is faster, smaller, and made by 3D users instead of made by Autodesk. Blender can do everything that those 2 applications can do, and has several external renderers available.

The only drawback of blender is that it can be hard to learn if you are much used to another 3D application. But I warned you about that already... 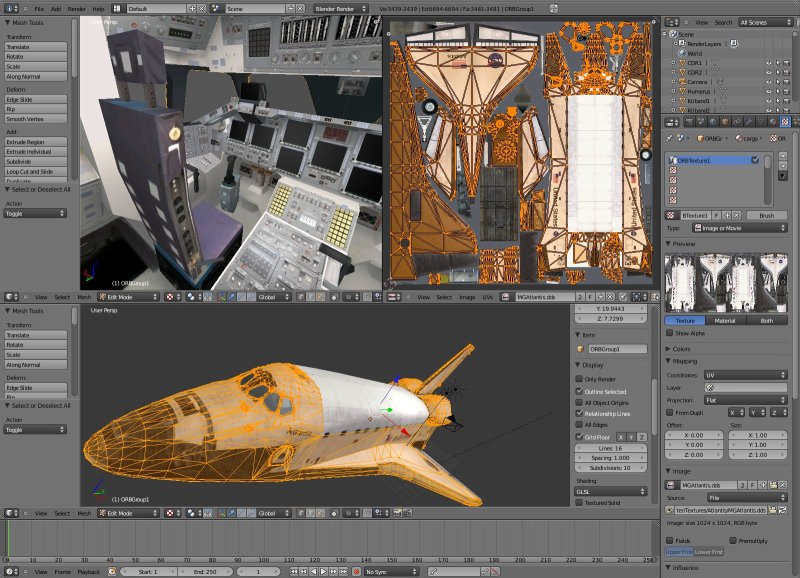 In fact, I use Blender so much that it is now not only what I use to do rendering, but also to compose architecture: 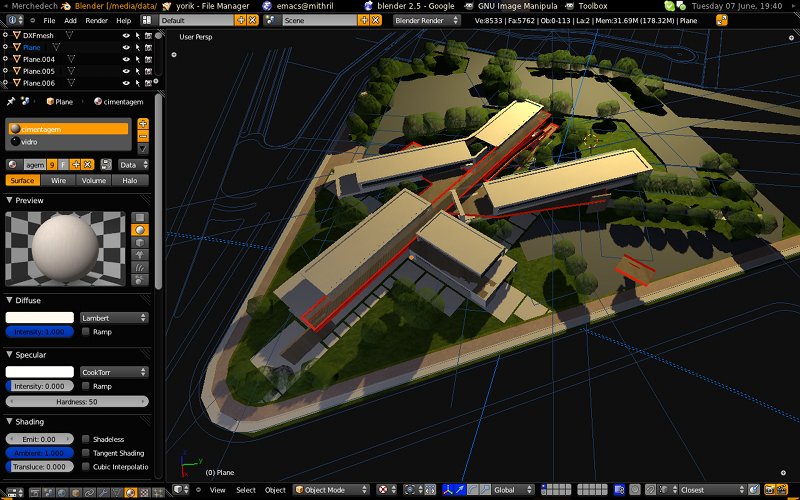 I also write a lot about Blender, there are also many tutorials on the homepage of this site.

But there is something I didn't tell you yet. Remember I told Windows applications don't run on Linux, right? Well it's not totally true. There is a little gem of a software, called Wine, which allows to run Windows applications on a Linux system. It won't work with all applications, and many will run with problems. But one of the applications that runs almost perfectly is Sketchup! Installing Windows applications with Wine is nowadays almost as easy as installing them on Windows, and they integrate seamlessly on your desktop (But of course it is never as comfortable and fast as running a native Linux application). The Wine website has a list of windows software that runs with it, with ratings, comments and notes.

What would be of us architects without photoshop, right? The most famous Linux photoshop-like application is called Gimp, and, although many purists will argue that it lacks some or another indispensable photoshop option, is an excellent and very mature application, totally able to perform all the tasks architects usually require from photoshop, and, thanks to the typical friendliness to extension and customization found in most Linux applications, you can extend it into a very powerful digital painting platform. 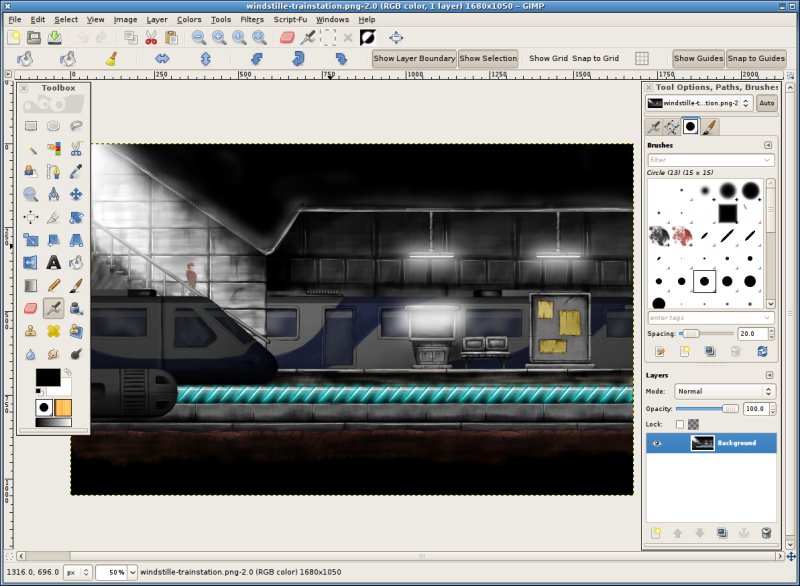 To give you an idea, this is the kind of drawing that you can achieve with gimp only: 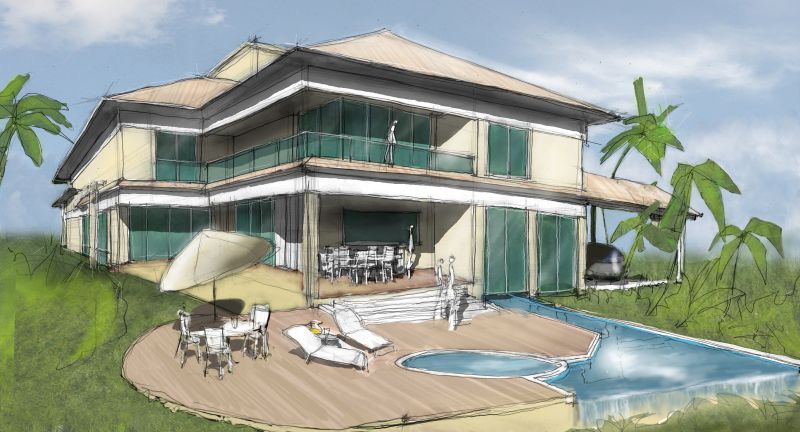 But a lot of digital artists use Linux nowadays, so there are many more interesting tools available, like MyPaint or Krita.Another must-have Linux application is inkscape, which is a vectorial drawing application, similar to Corel Draw or Illustrator. It is commonly used for drawing diagrams, icons and vector artwork, but is perfect for mounting more complex presentation sheets. 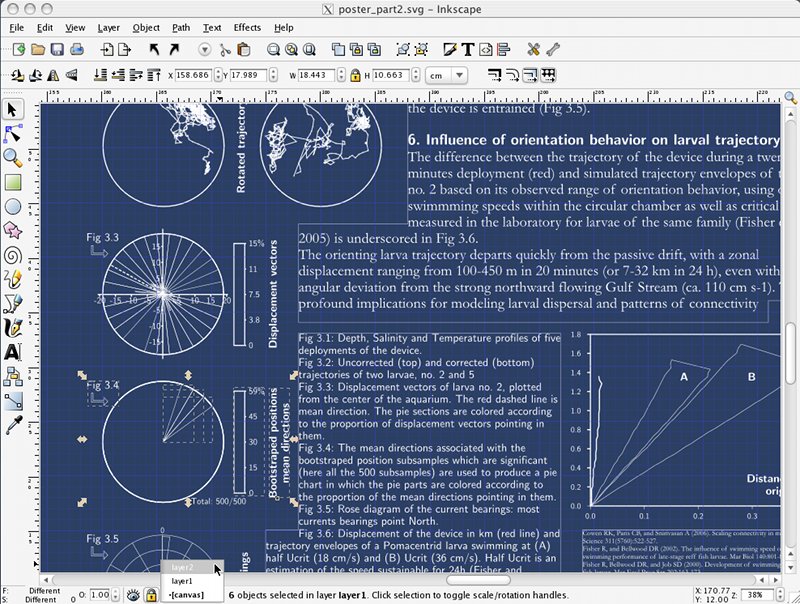 Also worth noting, many of those applications also run on windows, so it's a good place to try.

Are there architects out there who use Linux?

Because of all the little problems but mostly because it is not very well known, very few architects use Linux at this time. But things are changing fast... Here is a list of interesting people who share tips, techniques and resources about the subject: