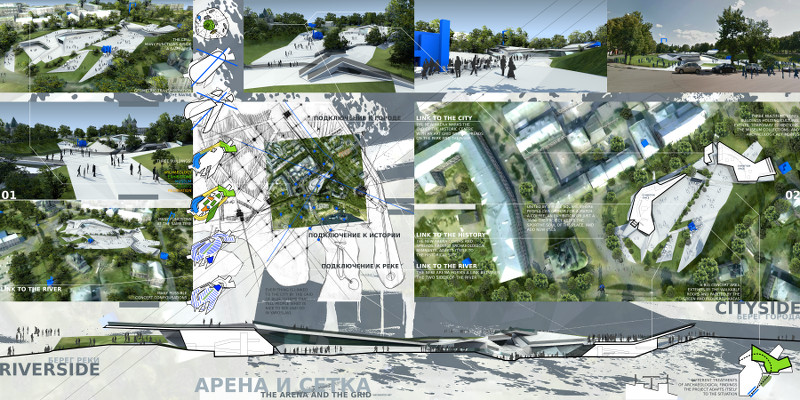 This is a proposal for the Yaroslavl Spartacus Alive architecture competition, that asked for solutions for a very nice and strategic spot in the middle of the historical and UNESCO-protected city of Yaroslavl in Russia. Our proposal didn't win, although it got shortlisted and is selected for the Yaroslavl Architecture Biennale. 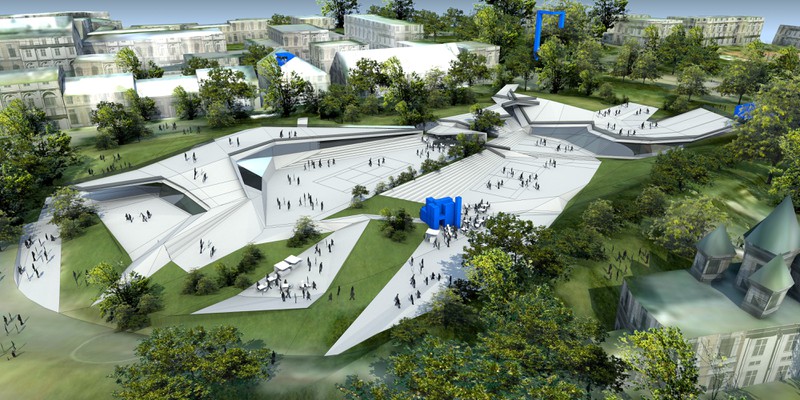 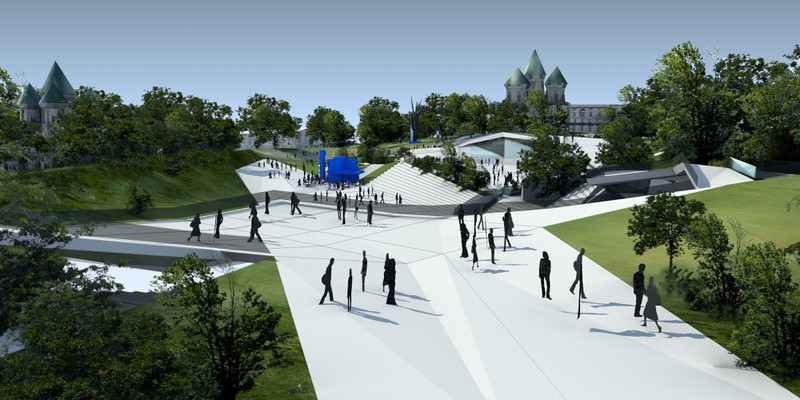 The arena is left almost entirely to its current function: An open space, fit for sports, recreation, shows, and any other spontaneous use that may arise. There, three new «buildings» are added: two above ground, for exhibitions of any type, and one underground, for archaeological exhibitions.

Additionally, with the creation of a grid of art and entertainment points (sculptures, architectural «follies», art installations, etc...) the arena also gains a prominent artistic role, and becomes a «patch» that links the two parts (north and south of the Kotorosl river) of the city.

The whole design is a free-form, adaptable system, made to be further adapted to the space demands of museum uses, and to the archaeological findings on the site. 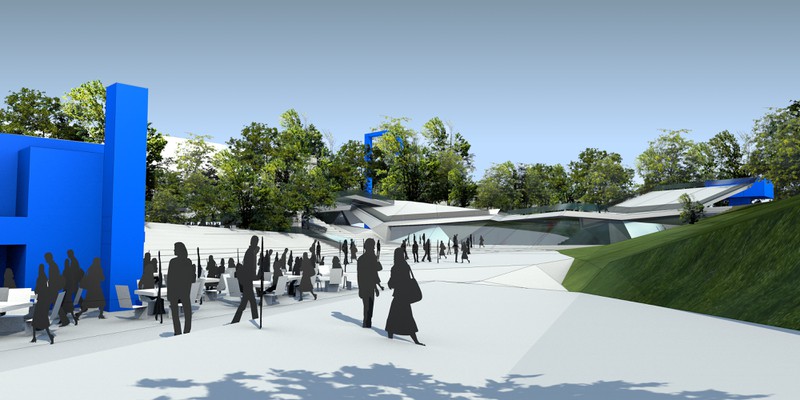 THE ART GRID LINKING THE CITY 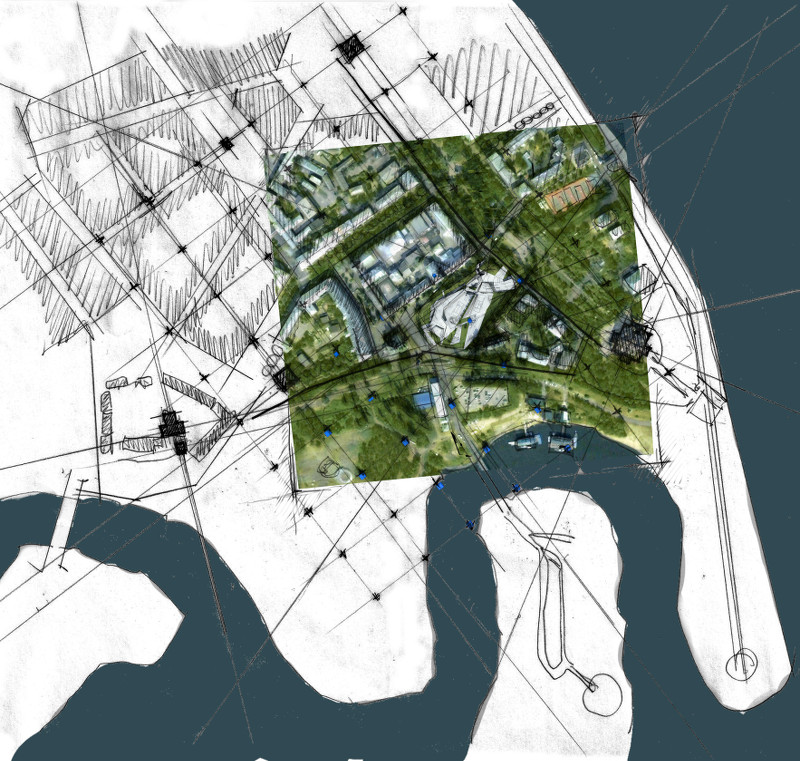 The new arena marks the end of the historic centre with an art and entertainment grid which spreads on the park and the river making a link between the northern and southern parts of the city . This grid is made of totems made by different artists, from sculptors to painters, from architects to designers. Each one changes in form and use depending of its location.

Each totem can be an art installation or a sculpture. They can be sometimes a map which tells visitors about the city, sometimes an historic or artistic description of the site or building. Some of them can be bigger like architectural «follies» and to be a point of encounter: a coffee shop or a small snack bar, or an area with benches for resting, or marking a nice point of view over surrounding buildings. All of them are colored in the color of Yaroslavl: blue, to make a visual link for the people who are walking around the city.

These totems act like a group of blue fingers emerging from the center of the arena site and telling people what is nice to see and do in Yaroslavl. As doing this the grid transforms the new arena in the core of a link between the two sides of the river.

THE HISTORICAL LINK AND CURRENT USES 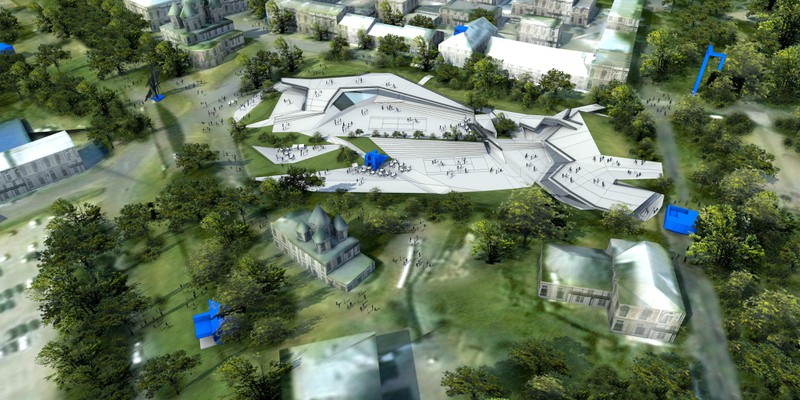 The underground building is made mainly for archaeological exhibitions.

The two buildings above ground are totally multi-functional, and can hold cultural events, temporary exhibitions or museum collections.

These two buildings are united by a huge square where people can gather for a match, a coffee, an exhibition or just a talk. The project keeps the new arena area as an encounter space and preserves the sportive soul of the place, respecting its current uses and major function in the city.

The square is easily transformed in a big concert area, extended by the walkable roofs. The roofs are painted by the green and flowered areas that are extensions of the parks that surround the arena.

The ensemble of these buildings and grids makes a great blend, combining all kinds of activities like art, sports, history and shows in the same place. This mixture is essential to keep the animation, occupying the area during the whole year and spawning all other kind of spontaneous activities.

The interaction of these activities creates a synergy between them: at the same time people who are invited to the formal exhibitions can be part of the spontaneous activities. People spending time around the square, looking for some grid installation or participating to some sportive event can be potential public for the more formal activities.

So it creates an endless recurrent invitation, generating and supporting the life of the place, which can only exist if it gathers many users. 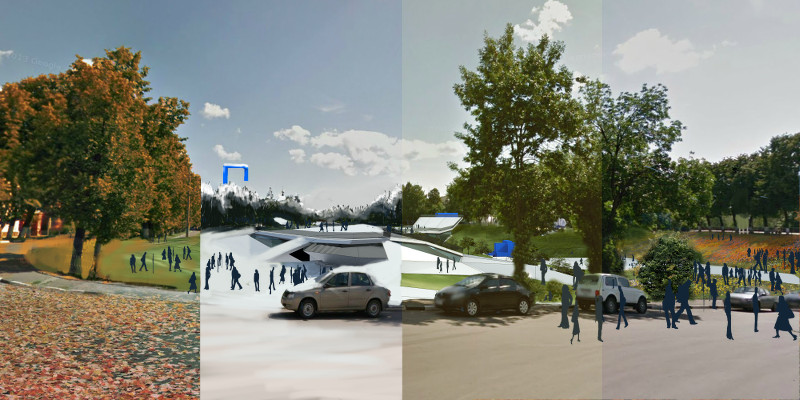